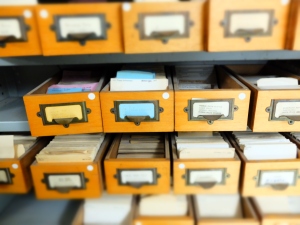 I’m currently revising my second novel. Like my first, it’s had many working titles, but finding one that will stick seems to be harder this time around. I’m a bit of a title collector** and keep a running list on my laptop of existing book titles I like, alongside a constantly shifting list of possible titles for what I’m writing.

The title of my first book, Our Endless Numbered Days came from an album by Iron & Wine. I listened continually to his music as I wrote – all the 100 songs I own – and the title slipped into my subconscious one day and was perfect. I like the way it rolls off the tongue in its lovely oxymoronic way. I was very lucky because the title I chose has stayed with the book for the English speaking countries it has been published in.

According Juliet Annan, my Editor at Fig Tree (Penguin) about 60% of her books keep the title they are submitted with. But of course, even these might not be the author’s choice – sometimes agents are unhappy with the original title and the name gets changed even before the manuscript reaches the publisher.

Jo Bloom, author of Ridley Road had The Meetings as the original title of her novel: “At my initial meeting with my agent before I signed with her, she talked through what changes she felt the manuscript needed. She also said she didn’t think the title worked. I wasn’t welded to it so I agreed to change it but didn’t come up with another until just before submission to publishers. I had a long list of terrible, potential titles and it came out of that. It was a collaborative decision and a good one. It works on lots of levels.”

The thing that really does amaze me is when writers say their title came before the story or the characters. How wonderful to be able to create something as big and complex as a novel from a few words, and then be able to keep them right through to publication. Iona Grey, author of the recently published Letters to the Lost, says, “My title was actually the first thing I came up with and sparked the idea for the book, which was written around it. Luckily my agent and publisher liked it and didn’t want to change it, so we were all in happy agreement.”

If a writer loves the title they’ve come up with and thinks it’s perfect, I imagine it can be very hard if their publisher wants the title to be changed. Writers can and should push back of course, and as Juliet Annan says, publishers and writers have to agree on the final title, it’s no good if a writer is unhappy with the publisher’s idea. But it also has to be right: “The title of a book is incredibly important,” she says. “It’s a promise — it’s got to entice and intrigue.  Title, cover image, copy — those are the three things that start the ball rolling with our sales department and then reviewers, the media and booksellers. And they’re the things a buyer looks at whether they are shopping in a bookshop or online. I’m not shy of asking writers to change the title if I think their original one doesn’t work. It’s the publisher’s job to be opportunistic in the best possible way, and getting the title right is part of that.”

As for my second book, I’m not sure yet which category it will fit into, perhaps it will be one of the few delivered without a name at all; although in between edits you’ll still find me fiddling with those lists.

* I can’t tell you how long it took me to come up with the title of this blog post. (Okay – not very long)

** Here are some titles I love of existing books (I’m not brave enough to put up the list of my working titles). I would love to know what your favourites are.