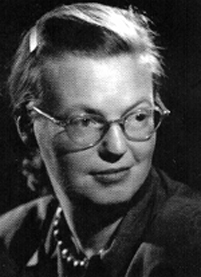 I’m a huge fan of the novel We Have Always Lived in the Castle, by Shirley Jackson. In fact, it could easily be my (current) favourite book ever. And so I’m very excited about the biography of Jackson that Ruth Franklin is writing. Every so often Ruth sends out an email to subscribers about how she’s getting on (you can sign up here), and this week I received an update about Ruth’s search for some of Jackson’s letters. It’s a fascinating story, and I’m sharing it below with Ruth’s permission.

Last spring, during an ordinary day of research in Shirley Jackson’s archive at the Library of Congress, I came upon a file containing about a dozen long, chatty, intelligent letters from a woman I’ll call Anne. A housewife in Baltimore (my hometown), Anne sent Shirley a fan letter after reading an essay she had written about the Oz books, and an intense correspondence ensued: a letter every month or so for about a year, from December 1959 to January 1961. Shirley rarely saved drafts of her letters, but from Anne’s responses I had a sense of what she must have written: there were stories of family life (both women had four children), recipes, and much talk about books: fantasy and science fiction (Tolkien), poetry (Dylan Thomas), children’s literature (Oz, the Moomintroll series, E. Nesbit). There were also details about We Have Always Lived in the Castle, which Shirley began writing around the same time as the correspondence started. Poignantly, Anne wrote of her own struggle to write and her desire to carve out space for herself amid her obligations to her kids and her husband.

I closed the folder knowing that I had to find Shirley’s letters to Anne. Shirley’s diary-keeping was sporadic; with few exceptions, the only substantive letters of hers that still exist are to her parents and touch only briefly on her writing. Letters about her work on Castle, her last completed novel, would be invaluable.

A Google search turned up Anne’s daughter Nora, who responded quickly to my email. Yes, Nora remembered quite well her mother’s correspondence with Shirley Jackson; one of Shirley’s children had even come to visit the family in Baltimore. But Anne had died more than a year earlier, and most of her possessions were carted off in a dumpster.

I was saddened but not surprised. An occupational hazard of women’s biography is that one’s subject tends to correspond with other women — often non-writers whose papers are not preserved. I kicked myself hard for not having come upon Anne’s letters sooner, resolved to interview Nora at some point about her mother’s relationship with Shirley, and put the letters out of my mind.

A week ago, I received a surprise email from Nora. Her mother, it seemed, had owned a country house that would soon be sold. Nora realized that the letters might have been kept there, in an old animal barn. Those words galvanized me. We arranged to meet at the house — a four-hour drive from New York — the following day.

The barn was filled with a lifetime’s worth of detritus: old toys, clothing, knickknacks, and box upon box of newspapers, magazines, and letters. We soon were covered in dust and dirt. Mice had chewed through many of the boxes. An afternoon of searching turned up letters from various friends and family members, but nothing from Shirley. Nora had to leave, but I decided to stick around for another day: the barn contained easily a hundred more boxes. Feeling a little like Hercules before the Augean stables, I asked a friend to come and help.

Did I mention that all this was done by flashlight?

By the time she arrived, around noon the next day, I had already spent the morning taking apart the barn, with no luck. My friend wondered what was in the front half of the barn, which I had only glanced at: Nora thought the letters would be in the back. We opened the door to a room strewn with more boxes and old furniture — including a wooden filing cabinet. With some difficulty, we jiggled open the heavy top drawer. My friend reached inside and pulled out one of Shirley’s letters.

The elation we felt is hard to describe. There were definitely tears. After we calmed down, we went through the drawer carefully. Most of the letters were still in their original envelopes, with postmarks — important, because Shirley rarely dated her letters. Many were on her trademark yellow typing paper, which held up amazingly well over the last fifty-plus years. Anne had numbered the envelopes, so we could be sure we had found all the letters. In total, there were fifteen of them, and they are as extraordinary as I imagined them to be.

A small assortment of the letters.

SO WHAT DO THE LETTERS SAY? you ask. Well, for now that will have to wait. Soon, they will go to Shirley’s archive at the Library of Congress, where they belong. But first I plan to enjoy touching them for just a little longer.

It now feels like an anti-climax, but I have an essay in this weekend’s New York Times Book Review about Shirley’s two hilarious household chronicles, Life Among the Savages and Raising Demons. I also spoke about the books on the NYTBR podcast (my segment begins around 19:00). A few years ago, with my two small children in tow, I went to get Raising Demons from the library. The checkout clerk peered over the desk at my children. “Is it a how-to manual?” he quipped.
Wishing you a week of happy surprises and discoveries,
Ruth

10 thoughts on “The Letters in the Barn”